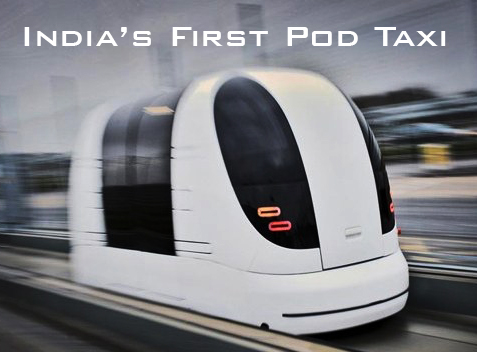 Everyone knows that recent research shows, In 2020 India’s population will be expected to reach 1.35 billion, which is higher than the china’s population.  In that case India has to face poor employment opportunities, road traffic, pollutions, food scarcity and lot of challenges in the upcoming years.

For these reasons, India has fore vision seeking a multi solution for future travel mode transformation. That’s the project POD Taxi and also known as PRT (Public Rapid Transmit). This is one of the India’s biggest dream project in the future of travel and it’s first pod taxi project in India says Road transport department and Highway minister Nitin Gadkari.  Pod taxi project has been lead by NHAI with the project estimated cost around Rs.4000 crore schemes.

The first step off moved a closer reality execute it on Delhi to Gurugram stretch around 12.3 Km distance and its operational cost is estimated cheaper than the metro rail.

In this Pod Taxi 5 person can travel at a time and it’s a fully automatic electric driverless taxi. This is much awaited people’s expectation travel mode in India. This taxi can travel 5 – 10 meter above from the ground level and equipped with military wireless sensors technology. The following three aspects of advantages are implemented in this POD Taxi.

The execute team committee request for quotation from the interested multinational companies and committee clearly states that the security and safety will be taken as per the team recommendation. And also the committee recommended the APM (Automated People Mover) standards in US to maiden the PRT project with the help of American society of Civil engineers.

Initially three global companies were called to joint as venture with the Indian partnership of Gawar construction including New Zealand’s Metrino Personal Rapid Transit. Definitely the Pod taxi will become as call taxi which fulfills the demand of common people and also small group travellers can use it as a shuttle service.

POD Taxi is a green revolution methodology approach of HI-FI undisturbed journey for the future of travel in India.